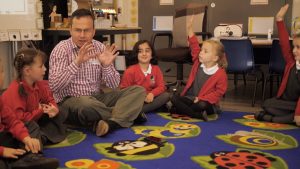 I am a keen theatrical improviser, and I find that many skills such as good listening, and willingness to pursue ideas without preconceptions are common to improv and to philosophy. I live on a narrowboat in Cambridge and enjoy caving and hillwalking.

A video to help you discover philosophical dimensions in topics

A game to mix up a group and introduce philosophical questions.

The Lottery of Life

A readers' theatre script exploring the idea of a 'fair society' and using John Rawls 'Veil of Ignorance' as a central idea.

Monsters are a standard feature of literature from myth to children's fiction. This stimulus story raises the question of why monsters are important.

The Conscience of Huckleberry Finn

Link to an accessible but thought-provoking article on questions around 'bad morality', conscience and empathy. It's not suitable for classroom use, but it's a good example of philosophical skills at work.