Readers’ Theatre (RT) combines expressive reading supported by simple theatre conventions such as: basic entrances and exits, minimal mime, minimal props such as music stands for narrators and, occasionally, sound effects. Readers are able to hold scripts so there is no need for memorisation. Rehearsal time fits into the time available.

Theatre conventions can be illustrated quickly using a very short script such as a joke. Here is a class of 14-year-olds performing a joke about an airplane emergency. There is one narrator, one character (the pilot) and 4 ‘engines’. 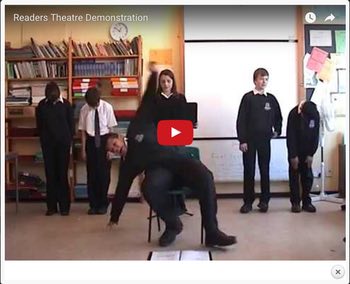 RT is most often created out of fictional stories but other literature such as news, documentary, history and philosophical dialogues can also be used.

The style is ‘presentational’ so narrators often convey much of the story. However characters sometimes take on bits of the narration in order to achieve a balance among speakers.

We illustrate this using an extract from ‘The Princess and the Pea’ by Hans Christian Andersen. The following extract could all be spoken by a narrator but a performance can be more dynamic if characters take a share.

NARRATOR 1: There was once a prince who wanted to marry a princess
PRINCE: But she should be a real princess.
NARRATOR 1: So he travelled about
PRINCE: All through the world to find a real one
NARRATOR 1: But everywhere there were problems

RT Scrips can be created by or provided for the participants. It is clear that the act of scripting is an interesting challenge, forcing readers to structure phrases and sentences with an eye towards the impact of the text in performance and its meaning. Consider, for example, the last third line above. It wouldn’t make sense to have the prince say ‘he travelled about’. The sentence has to be split at just the right place to work.

One quick method for turning a piece of prose into a script is to copy it for all readers and have them mark it into parts for narrators and characters (using a pencil to allow changes). They code the parts with initials and then mark their own lines with a highlighting pen. During performance, they read only their own highlighted parts. More complex scripts and pieces of original scriptwriting by pupils will have to be written out (or word processed) and photocopied. In the image below, there is a picture of a 10-year-old pupil marking up some text. She is working with others in a group. This is a great way to have pupils focus on meaning and expression. The text is marked up with two narrators (N1 and N2) and two characters (F and T – Frog and Toad) 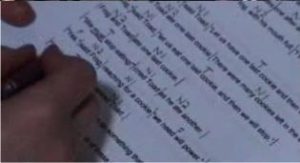 Advanced Readers’ Theatre
Here is a group of of teachers from a course I ran, presenting ‘Perfection’ by Natalie Babbit from ‘The Devils Storybook’ (Farrar, Straus and Giroux, 1974). They marked up the text themselves and chose when to change speakers 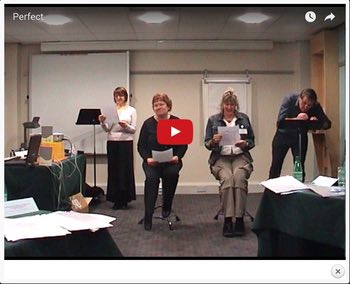 Note some Readers’ Theatre conventions in the videos:

Further Explanations
I’ve added some attachments to give further information about Readers’ Theatre conventions and practicalities.

Links
Readers Theatre Scripts: There are some good ready-made scripts at Aaron Shepards RT page. They are mostly folk tales from around the world.

Organising RT in your classroom DOC