A brief history of philosophy for Children 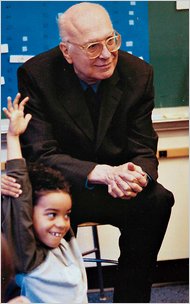 PHILOSOPHY FOR CHILDREN, or P4C for short, was the title Professor Matthew Lipman gave to his project of using the discipline of philosophy as resource to help children become more intellectually energetic, curious, critical, creative and reasonable.

He conceived the project in the late sixties when he was teaching philosophy at Columbia University, New York. It was a time of social conflict when reasonableness in all senses of the word seemed in short supply. At that time, there was a growing interest in education programmes to develop ‘thinking skills’ and a feeling that people ought to be able to think for themselves in the face of competing values, authorities and solutions. Educationalists, then as now, were concerned that schools were making pupils into passive learners who expected to be told what to think. They feared that schools were providing poor preparation for further learning and for life itself.

Why was Lipman so convinced that philosophy was, potentially, such a rich resource for education and for self-sustainable thinking and learning? Here, in summary, and not in his own words, are the kinds of responses he has given in books and articles.

Lipman was convinced that children were not only capable of talking about matters of significance but also that they were naturally disposed to question and wonder. They were hungry for intellectual nourishment. While serving in France during World War 2, he noticed ‘greater intellectual camaraderie’ between adults and children in sharing and discussing literature through ‘thoughtful dialogue’.

He decided to devote himself to making the resources of philosophy accessible to children through thoughtful dialogue stimulated by the sharing of literature. He was inspired by writers of dialogues, such as Plato and Diderot (and by the ‘Charlie Brown’ cartoons), to create philosophical dialogues (Lipman calls them novels) in which reasoning, questioning and conceptual exploration were revealed to be important in the lives of a group of pupils, friends and teachers. His first philosophical novel for children – Harry Stottlemeier’s Discovery – was completed in 1969. Others followed, as documented on the timeline page of the website of the Institute for the Advancement of Philosophy for Children (IAPC), the organisation for P4C established by Lipman and his collaborators at Montclair State College (now University), New Jersey.

Lipman realised that teachers and philosophers who were to discuss the novels with children needed some induction into the aims of the project, the connections with the discipline of philosophy and the means by which adults and children would be able to have thoughtful dialogues together. Influenced by  American pragmatist philosophers Pierce and Dewey, he envisaged the ‘community of inquiry’ – a caring yet critical and creative group of collaborators in dialogue. Together, in their community of inquiry, adults and children would raise questions and carefully examine suggestions for answers.

Lipman and colleagues such as Ann Sharp and Fred Oscanyon produced manuals for adults, rich in ways and means of ‘doing’ philosophy. He also tutored adults directly, in courses organised by the IAPC. The IAPC also acquired grants to test its materials and methods in New Jersey schools. These studies provided empirical evidence early on to support Lipman’s insights that children are capable of engaging with philosophical questions, and that doing so improves their cognitive and social skills, and makes their educational experience more meaningful.

The IAPC collection of novels and manuals eventually catered for pupils aged from 4-16 years and constitute the ‘Philosophy for Children’ curriculum. They are available from the IAPC and remain an inspiration to all those who share Lipman’s aspiration to bring philosophy to younger people. There will, indeed, be echoes of them in many of the resources to be found on this website.

In the 1970s, Lipman and Sharp also began a Master’s degree programme in Philosophy for Children at Montclair, and a Doctoral programme in the 1990s. Today, university courses in P4C are on offer through organisations and universities around the world.

Philosophy for Children gets noticed

As the Lipman curriculum was put into practice and evaluated, it became clear that it was a significant educational intervention. Controlled studies showed that it had a positive impact on young people’s reading and reasoning skills, and on their interpersonal relationships.

Not surprisingly, interest in the curriculum and practice of ‘Philosophy for Children’ arose in other countries. From early on, the IAPC welcomed teachers and philosophy professors from around the world to its courses and workshops, and began offering workshops beyond the USA. The IAPC curriculum was translated and adapted in scores of countries. Following a P4C workshop in Denmark in 1983, the International Council for Philosophical Inquiry with Children (ICPIC) was formed, and since then the practice of thoughtful dialogue in communities of inquiry has been taken forward in over 60 countries.

Widening the range of materials

As the value of philosophical thinking in communities of inquiry became apparent and a wider range of people started to experiment with the approach, some found that other materials, apart from Lipman’s original novels, were also effective at stimulating children’s interest in philosophical problems and concepts. For example, in the late 80s, Karin Murris in the UK and Tim Sprod in Australia produced materials that supported the use of picture books in philosophical inquiry. Also in Australia, Philip Cam edited a series of books called ‘Thinking Stories’, which included purpose-written materials from several countries.

Educators in many countries have developed curriculum materials to suit their own national cultures or educational systems. These range from Per Jespersen, who has built on the tradition of story-telling in Denmark, to Catherine McCall, who prefers a particular approach, partly inspired by Scottish Enlightenment thinking, that she characterises as PI (Philosophical Inquiry). Other projects in Europe have been based on art and museum visits, and on the theme of ecology, which resulted in a CD funded by the European Union called ‘Ecodialogo’. Vigorous movements of P4C have also developed in Canada and in Latin America. And there have also been proponents of P4C in countries such as Taiwan, the Philippines, Singapore, and S. Korea, where the practice is being thoughtfully influenced by traditions of Eastern philosophy.

We regret not having space here to mention all the countries where P4C is practised, but a good list can be found on the IAPC webpage, World of Philosophy for Children.

Over the past four decades a body of philosophical and empirical research on philosophy for, of and with children and adolescents has built up, amounting to thousands of academic books, articles, and doctoral dissertations, from scores of countries. Pre-college philosophy is the topic of dozens of academic conferences or special conference sessions every year, and is the primary focus of four academic journals, as well as a frequent focus of numerous other journals in philosophy and education.

P4C.COM as part of the tradition

Matthew Lipman has been very generous in his support for and engagement with all those people who have shared his vision of making the resources of philosophy available to children and young people. Neither he, nor the IAPC, have tried to restrict development of p4c by insisting that it is an exclusive commercial brand name. On this site we differentiate the IAPC program and other developments by the use of capitals: Philosophy for Children (P4C) for the IAPC materials and philosophy for children (p4c) for the tradition in general and in all its variety.

We see p4c.com as part of the p4c tradition and as a support for people who want to experiment and collaborate with a range of materials and ideas, including those of the IAPC.